230% increase in the user engagement

Techland is a worldwide game developer and publisher.

Their most popular and critically acclaimed title is the Dying Light franchise, played by more than half a million unique gamers every month. 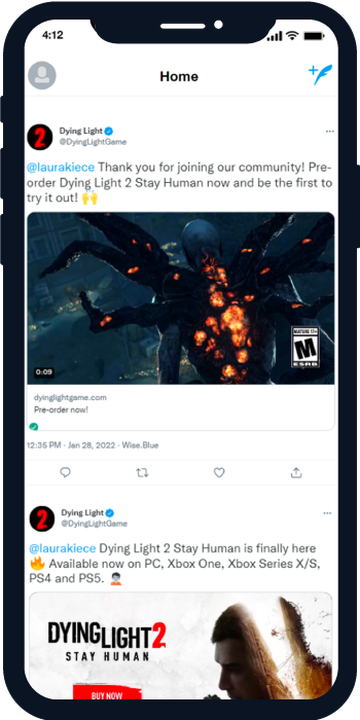 Techland was looking to generate buzz around their new game, Dying Light 2, as well as connect with the Twitter gaming community and achieve sales after launch. To complete their mission successfully, they utilised Wise.blue’s Heart2Remind feature, a brand reminder feature perfect for new product launches. A promotional tweet with a preview of the new game was sent to Twitter users, encouraging them to like it in order to receive updates about the game. After liking the tweet, an instant response was sent to motivated users, thanking them for joining the Techland Twitter community. On launch day, and two days succeeding the launch, opted-in audiences received a tweet notifying and reminding them about the game’s official release. Using this approach, Techland and Wise.blue managed to engage the Twitter gaming community and create a personalised brand experience that converted users into customers. The campaign resulted in more than 6,400 likes on the first promotional tweet and more than 10,000 link clicks overall.

Ready to engage your audience? Heart2Remind - a rewarding addition to the user acquisition mix.